You might have noticed a few changes around here. Due to an ever-growing demand for our award-winning pies we have been forced to expand our premises, and happily seat up to 150 customers now that our renovation is complete. If we could describe the process in one word, it would be this, “headache!”

Anyone who has ever renovated knows that unexpected hitches can turn a tiny extension into a major drama. For us, there was a small problem – we weren’t allowed to have customer parking in front of the store anymore, so it forced us to think outside the box. More specifically, we were forced to think backwards. 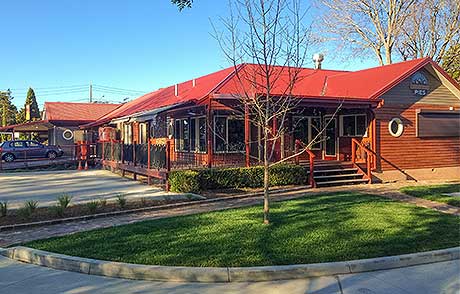 The new ‘front’ entrance at the rear of the building.

Flipping everything back to front

In an unusual move we decided to flip the layout, moving the front entrance to the back of the store. We literally turned our entire business around to accommodate the new 50 space carpark at the rear of the premises, ending the chaos of on-street parking and creating an ordered space for our customers.

As an added bonus the new car spaces are super-sized, offering a roomy 2.8 metres per car park as opposed to the standard 2.4 metres. That’s welcome news for tradies with work utes, parents with prams, time-poor commuters and anyone whose parking skills could use a bit of extra finesse. 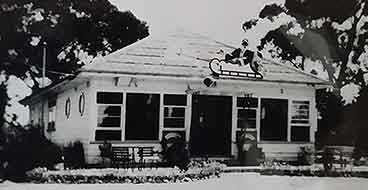 We now happily seat up to 150 customers, but our origins were far more humble. The café started life in 1955 as a weatherboard shack called “The Quarterdeck”, and the owners carried the nautical theme through to the kitschy lino floors and cut-outs of ships.

It continued as the quarterdeck under a few owners and with a few minor alterations through the 60’s, 70’s, 80’s & 90’s until becoming a Mexican restaurant around the turn of the century. Even then nothing much had changed until we took it over in 2006. Remarkably even in a climate such as ours the building had no heating, no gas, no fireplace and no ducted heating – in fact, they used cheap blow heaters under the tables to keep their customers warm!

Having a bit of fun at the coffee machine!

We’ve since invested a lot of time and money in the property, overseeing its transformation to one of the biggest pie shops in Australia. We’re already selling a massive 1200 pies per day, and have plans to double that within the next 3 – 5 years.

With that exhausting output of pies, we have matched it with a second coffee machine, making twice the number of barista-made coffees for our satisfied customers (and our hardworking team!) Time is important for our customers on the run and eating in, and our expanded coffee making facilities gets those coffees delivered into their hands nice and fast!

We look forward to seeing you at our renovated shop soon 🙂

Get Your Early Bird Coffee From 6am

Power for when you need it most!
Scroll to top