Autumn and Winter is storm season in the Mountains. In late spring we get the big winds but the storms usually arrive at this time of year and more often than not along with the storms come the blackouts.

We learn from experience…

In our time in business, the worst of these was a huge event that occurred in July 2011. It was mid July, freezing cold and halfway through the school holidays at the height of the tourist season, when a massive storm hit disrupting power to the whole the upper Mountains. The storm hit with such intensity that the power supply was cut in literally hundreds of locations as trees were uprooted and toppled taking the power lines down as they fell. A massive old tree also came down on a stationary train at Medlow Bath cutting train services to that area.

We were without power for over 24 hours but some Mountains residents – particularly those in the outer areas of Blackheath, were without power for up to two weeks. During that period many Mountains residents had to head down to Sydney to stay with friends and family while they waited for power to be restored as many had no heating or cooking facilities.

With staff being unable to work and our business being put on hold, we had always found blackouts to be frustrating, but this incident drove home how crucial it was to keep the lights on. The worst part was that many people just needed a hot meal and a place to warm up and we were unable to help them.

Does cost outweigh the need?

Despite recognizing the need for some sort of back up power we found the cost of installing such a system prohibitive and so we put plans for a generator on hold until we could afford it. Unfortunately we didn’t have to wait too long for a reminder. In October two years later the Mountains were all but evacuated as massive fire fronts fanned by high winds bore down on the Mountains leaving a devastating path of destruction in their wake.

Fortunately a massive counter response by the RFS halted the fires just short of the Mountains most populated areas. While we were largely spared, the areas that were hardest hit were again left without power and essential services for up to several weeks. Once again it highlighted how important it was for someone in the community to have power in extreme events like these. Shortly after that, we bit the bullet and installed a back up generator capable of keeping the entire business running. 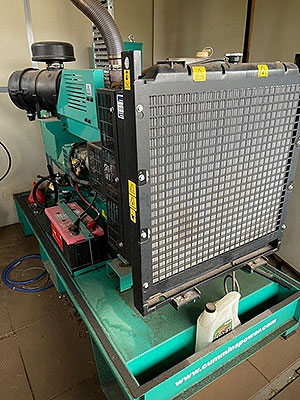 We would have loved to have installed a big solar system and back-up batteries, but given we are such an energy intensive business, the size and cost of something like this was totally prohibitive, especially considering it may only get limited use throughout the year. The diesel generator is flexible and powerful and at the time of writing was the only viable ‘lifesaver’ option.

True to form it’s when the weather is at it’s worst is the time when you most need the power on and unfortunately it’s also when it’s most likely to fail.  Now days the generator (or Genny  as we affectionately call it) sits idle waiting to be called on. We typically experience about ten power outages a year and while they are mostly brief they often come at the worst time. When the power drops out Genny automatically kicks in and takes over the power supply within 10 seconds.  Importantly it keeps us operating but more importantly it means that when there is a major event in the area that leaves a community without power there will always be somewhere people can go to get a hot meal and take some refuge from the elements.

About Our Recent Rebuild and Renovations